If you are looking for Android Emulators for PC & Mac, you want to do at least one of the following – develop apps for Android or, you want to enjoy Android games on a big screen. There may be other reasons as well like testing out a new ROM or perhaps you are just planning on making a switch from iOS to Android and want to get a taste of Android before you end up making the actual switch. 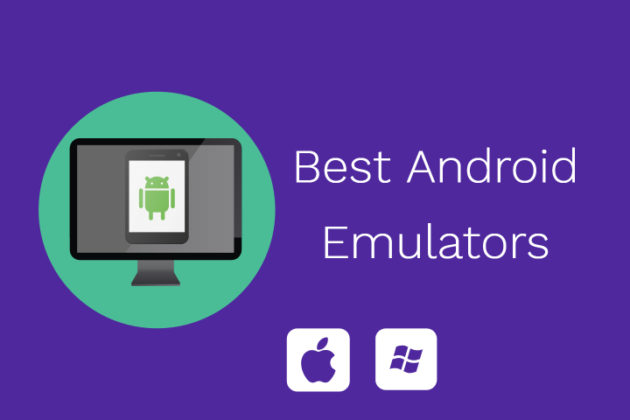 In this article, I will sum up the best Android emulators for PC & Mac that I have personally used and tested to find out their strengths and weaknesses. I will rank them in the order of my preference but albeit, you may have a different order altogether.

BlueStacks is one of THE MOST POPULAR emulators available today. It has been in the market for quite some time. One of the primary reasons why I used BlueStacks was gaming.

Why not productivity? That’s simply because I have access to every productivity tool I need on my desktop. I don’t need an Android device for productivity and as far as mobility is concerned, I will definitely not carry around my desktop to work with BlueStacks!

While on the move, I will be invariably stuck with a tiny device (running Android) that will anyway cripple my productivity. So, I find whining about BlueStacks performing sluggishly while dealing with productivity tools senseless.

I installed and used BlueStacks 4. This version has the following minimum system requirements:

The minimum system requirements for running BlueStacks 4 on Mac are:

This is the minimum requirement, but BlueStacks has what is called recommended system requirements for best performance. Do check that out.

This thing can run literally on a dinosaur. Unfortunately, I didn’t have a chance to test it on a system with low-end hardware because my desktops are quite powerful and can run almost every resource-intensive game or application I throw at them. But if you don’t have a high-end computer, here is a quick list of the primary system requirements:

MEmu Play is a relatively new player in the market. It was launched back in the year 2015 and it is based on Android Lollipop. It is quite decent for gaming but does exceptionally well in dealing with productivity apps. Here are the pros and cons that I found while using MEmu:

In my experience, use this emulator only and only if you are trying to develop an Android app or if you want to play fundamental games. Android Studio is not a proper emulator. It is a development IDE. IDE stands for Integrated Development Environment.

There is an integrated emulator that you can always use, but even it is best used for testing different apps. Playing games just don’t work well.

Just like BlueStacks, Nox App Player is hands down, one of the best Android emulators you can find. In my opinion, it is also an all-round emulator if you want to play Android games or use productivity apps or get an overall hang of Android.

Anyway, here is my impression of Nox App Player:

In case you are looking for an Android emulator for casual usage, or simply for playing games, GenyMotion is going to disappoint you big time! It is a premium emulator, and it is not cheap. This emulator is targeted for serious Android app developers.

GenyMotion is meant for serious business and comes with different pricing plans, customer support depending on the purchased plan, and it even comes with a whole cloud version. Basically, you can skip installing GenyMotion on your desktop and use it directly on the cloud.

In case you are interested, here are the pros and cons of this Android emulator are:

Okay, let me be clear. PrimeOS not just an emulator. It is a full-blown operating system! You can install it on your desktop or laptop as a standalone operating system or you can use dual boot! It is restricted to Windows users only. Mac users cannot enjoy this incredible OS!

Honestly, I did not find a reason that can make me install PrimeOS as a standalone operating system and ditch Windows completely. I use various software like Adobe Suite, Audacity, GIMP, InkSpace, Blender, video editors like Movavi, DaVinci Resolve, etc.

These cannot run on PrimeOS because they are not meant to! PrimeOS is based on Android! Yes, the whole thing is Android that is designed to give you a desktop experience similar to Mac or Windows.

On the flip side, however, if you have a spare desktop or laptop that you can dedicate to Android only, that’s fine. I did like PrimeOS a lot! Needless to say, I have PrimeOS on a dual boot and I intend to keep it that way.

There isn’t enough to actually complain about it! Whatever I think is not really a con as such. Here is what I feel:

If you ask me, you can definitely go ahead and replace your Windows OS with PrimeOS if your computing needs are restricted to social activities, emailing, and usage of office suites. You can even open websites and get into website backend (if you own one)! It is pretty good!

The basic system requirements for each variant are:

Bliss OS is not an emulator. Android emulators emulate Android on either PC or Mac. Bliss OS, just like PrimeOS, is Android itself. You need to install it separately as an operating system that runs natively on your computer hardware using all the processing power, memory, and storage.

Unfortunately, Bliss OS is not really as polished as PrimeOS and comes with some serious problems. Here is what I found:

The minimum requirement for installing Bliss OS (on a system running Windows) are:

If you are unsure about your system specs, you can download and run a small utility that will tell you whether it can run Bliss OS or not. You can find the utility here.

ARChon is far from being a popular Android emulator. It was never meant to be a standalone emulator in the first place. The whole idea behind ARChon development was to allow users to run apps from the Android ecosystem on Chrome OS.

The idea of ARChon was conceived when Google gave support for a couple of Android apps on Chrome Web Browser. Someone independently worked on ARChon after Google’s move to make other Android apps available on Chrome.

So, if you are looking for an emulator that you can use for hardcore gaming, ARChon is not up to the task.

Okay, let me be honest with you. The list above is not a complete list of best Android emulators for PC & Mac. There are a few more. For instance, there is MuMu App Player that is developed in China and has both Windows and Mac versions available.

MuMu has English-translated versions available (initially available in Mandarin Chinese), but I did not list it on the grounds of concern over data-leak. You may, however, try it on your own risk. The MuMu emulator does come with a polished interface and a lot of features that put it at par with BlueStacks or Nox App Player.

Again, we have KOPlayer – a famous emulator, but I couldn’t access its website. The website of KOPlayer simply keeps refusing connection irrespective of whether I use a proxy, or a VPN, or a direct connection.

If I can’t access the official site, I don’t see a reason why I should try to find an alternate source. I am not a big fan of Malwares and Spywares that can potentially infect my systems when I use an alternative source.

Last but not least, there is Remix OS. It was the original Android OS designed for desktops and laptops by a company formed by ex-employees of Google.

Something went wrong somewhere in that company, and they stopped supporting Remix OS. Alternates of Remix OS are PrimeOS and Bliss OS. Since Remix OS is no longer supported, I decided to exclude it from the list.

Mostly, this list of best Android emulators or PC & Mac contains only those that are under active development and received enthusiastic support.